The story of Dr.Bumpinator’s patient, Robert Peeters represents an extreme and unique case of severe AKN (Acne Keloidalis Nuchae)  which he struggled with for nearly 20 years. His major turning point on this journey came when he discovered the work of Dr.Bumpinator.

Continue to the video below to witness the beginning of one man’s remarkable journey of personal transformation.

When It All Started

Robert (aka @thebigluckybear on Instagram) had a very normal childhood. He was just like all the other kids. 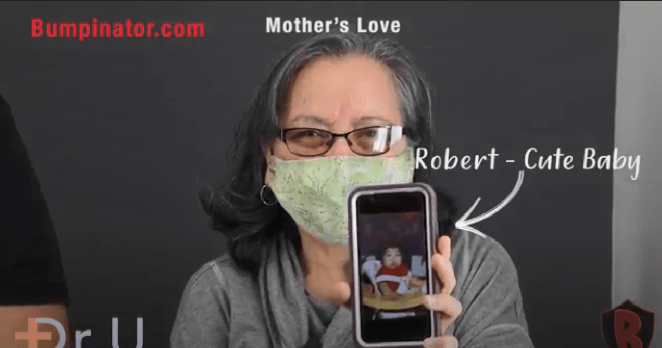 However, things changed at age  10 when small bumps started to appear on the back of his neck. Doctors thought they were warts. They did not know that these seemingly harmless bumps were actually the initial signs of Acne Keloidalis Nuchae. As a result of this misdiagnosis, Robert’s condition grew progressively worse.

Between the ages of 14-16, Robert started experiencing baldness as his AKN continued to spread throughout his scalp, contributing to a condition known as CVG (Cutis Verticis Gyratum). He also developed a different form of follicular inflammation known as pseudofolliculitis barbae, along with severe rhinophyma.

Different dermatologists prescribed Accutane, antibiotics, and all types of steroids.

Yet, not one of them was able to offer surgery as a way to actually remove the worsening bump outgrowths. 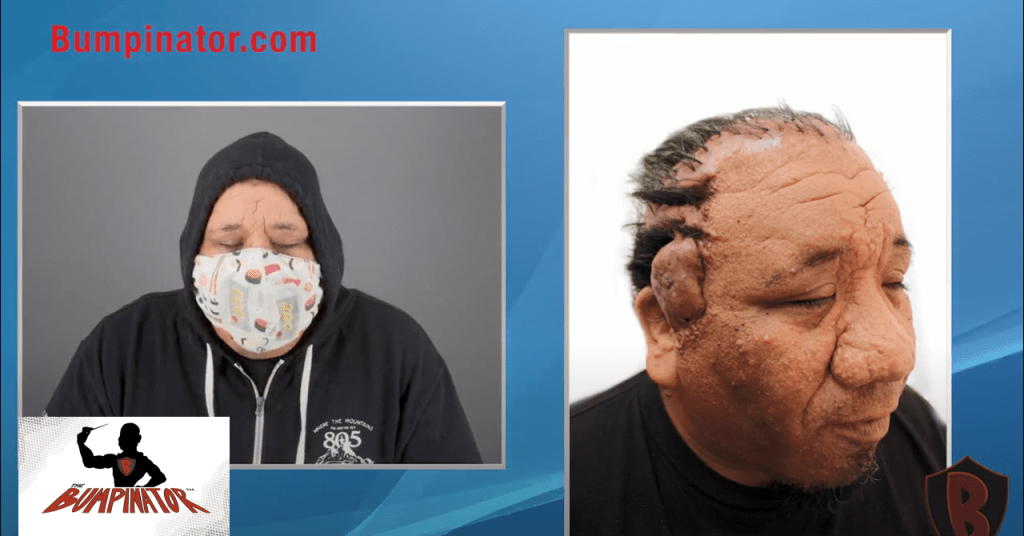 Robert felt terribly dismayed as his condition continued to get worse. Discharge and bleeding became issues for his choice of clothing (e.g. no white shirts) as well as bedding. Constant itching kept him up at night. Also, his condition adversely affected his professional and personal life. Uncomfortable social interactions became a regular part of his existence (e.g. children noticing and commenting, adults shying away from him, etc.).

Though he enjoys camping, hunting, and fishing, Robert’s severe AKN condition required that he remain in the city where he has easy access to hot running water and soap to keep up with his hygiene routine. 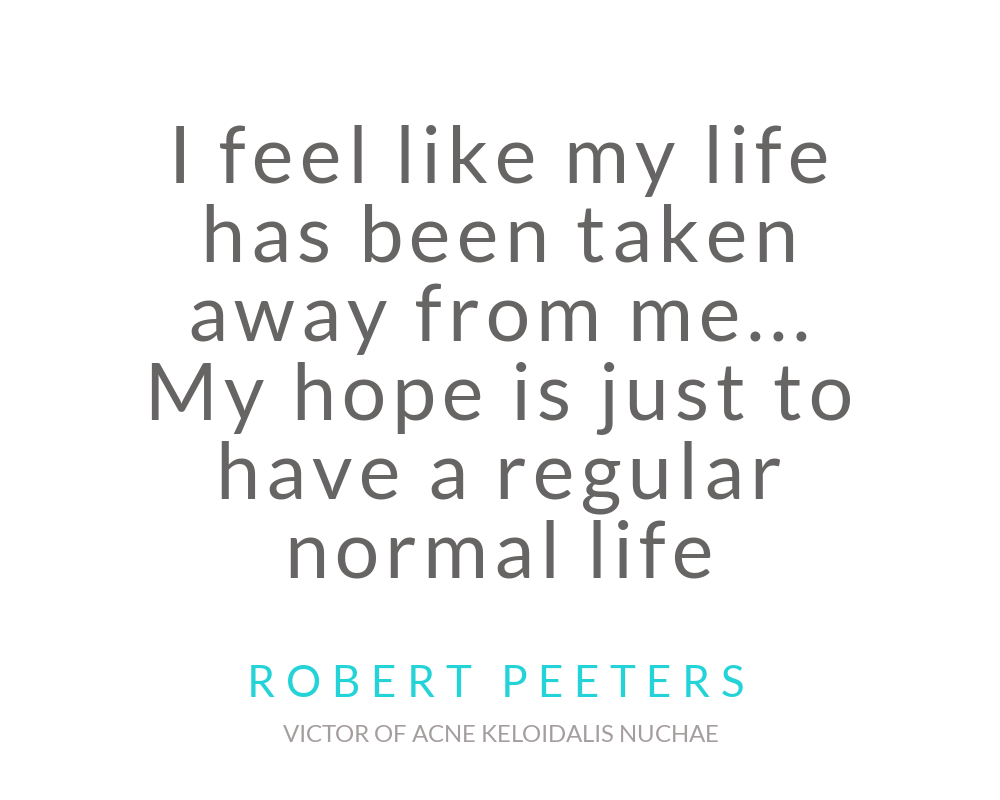 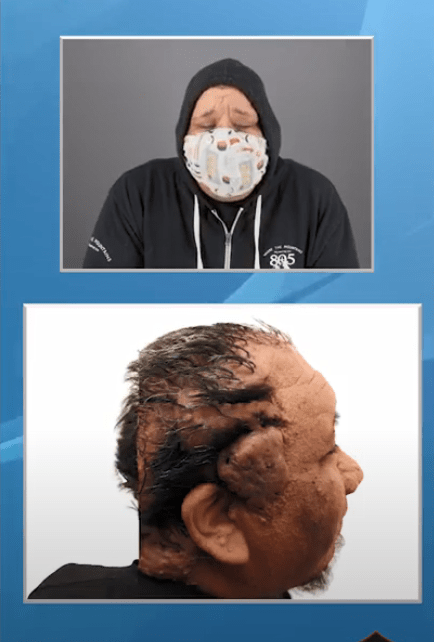 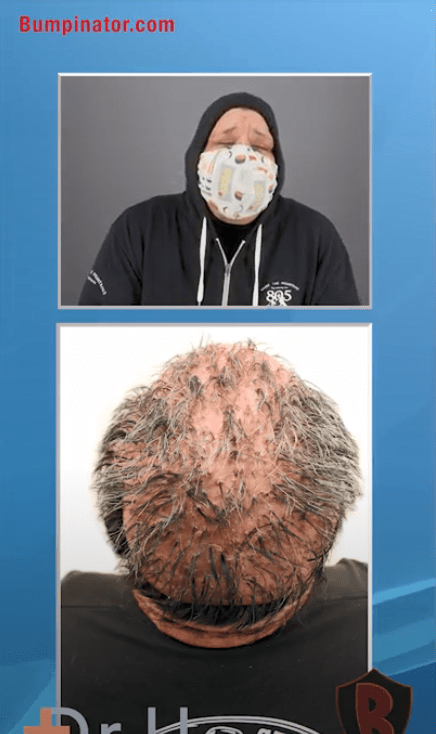 Inflammation associated with Robert’s conditions caused a back-of-the-head appearance that made him feel self-conscious.

Robert’s life started to change for the better when he learned that the term, Acne Keloidalis Nuchae applied to his condition. He decided to find a doctor who specialized in the removal of AKN. After conducting a search on You Tube, he discovered the doctor who would be able to actually help him, Dr. Bumpinator himself whom he described as “the only doctor who had the actual procedure done” and the only doctor that he noticed “who was actually physically treating the disease.”

Surgically removing the unwanted tissue growths on his head would pave the way for a more normal-looking appearance.

Dr.Bumpinator’s first line of attack was to assuage Robert’s symptoms and discomfort and observe how his condition would respond. He prescribed the following medications.

He also recommended a topical formulation of Turmeric to help reduce some of the inflammation associated with Robert’s condition. 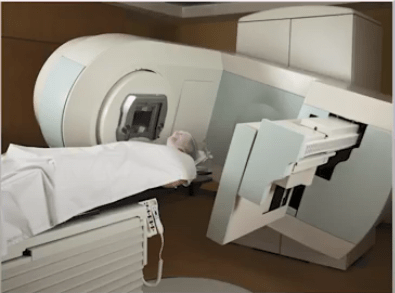 Though radiation is used in cancer treatment, it can also be used in the treatment of AKN for certain situations, like Robert’s.

After seeing no improvement, Dr.Bumpinator had Robert undergo radiation treatment to help destroy unwanted tissue. This was then followed by surgery.

The next phase of Robert’s treatment and personal transformation would involve the physical removal of his AKN, CVG, and pseudofolliculitis barbae.

Beyond this, Dr.Bumpinator also wanted to help this special patient achieve a normal-looking appearance so that he could start to experience life just like everyone else.

See what happens next in Part II of Robert’s journey with Dr.Bumpinator here.

Do You Suffer from Painful Bumps on Your Scalp or Back Head, Neck Area?

If you suspect that you have unwanted bumps, small or large, around your scalp area, or on the back of your head or neck, please feel free to consult with Dr. Sanusi Umar, AKA Dr. U, AKA The Bumpinator – some of these conditions, such as AKN, can be a relentless disease. It can easily worsen if left untreated, and still worsen if treated improperly through improper means.

With Dr. U AKA The Bumpinator, you rest assured that with over 20+ years of experience as a double licensed dermatologist and pioneer in the field of AKN research and surgery, Dr. U has got you covered.

If you suspect that you have any of these painful or annoying bumps on the back of your head, schedule a free video consultation with Dr. U using the button below.