What is Acne Keloidalis Nuchae or AKN?

What is Acne Keloidalis Nuchae or AKN? Acne Keloidalis Nuchae, also known as AKN or often misdiagnosed as barber’s rash, is a skin condition that usually affects males of color, and can be found as small or large bumps that may look similar to acne or keloid bumps. Often, AKN can be seen as razor bumps on the back of the head, or as a keloidal condition and may be misinterpreted as such. Although AKN bumps may look or feel like keloids, barber’s rash, or acne bumps, AKN or Acne Keloidalis Nuchae is a condition that is different from acne or keloids altogether and can grow to be much worse if left untreated. AKN is a relatively new condition, and thus there are only several doctors or healthcare professionals worldwide who have helped remove or lessen this condition successfully through surgical means or other procedures. AKN is typically found on the back of the head but can be found anywhere in the scalp region of the head.

At first, AKN may appear as small acne-like bumps or even razor bumps on the back of the head and neck. Yet these lesions are not the same as regular pimples: AKN is caused by a completely different set of factors.

Secondly, unlike regular acne, these AKN bumps will continue to keep getting bigger and bigger over time and may coalesce or combine together to form larger masses and lumps. They may start off as a mass that progressively gets larger. Yet in some cases, AKN masses may however remain discrete and never merge.

AKN Can Worsen & Complicate Over Time

Due to the possibility and likelihood of AKN bumps getting worse over time, it may be harder to treat more severe cases of AKN that have worsened in condition.

If you suspect that you have AKN, it is best to contact an experienced and licensed medical professional immediately to diagnose the condition and to formulate a treatment plan accordingly before the AKN gets any worse and harder to treat. 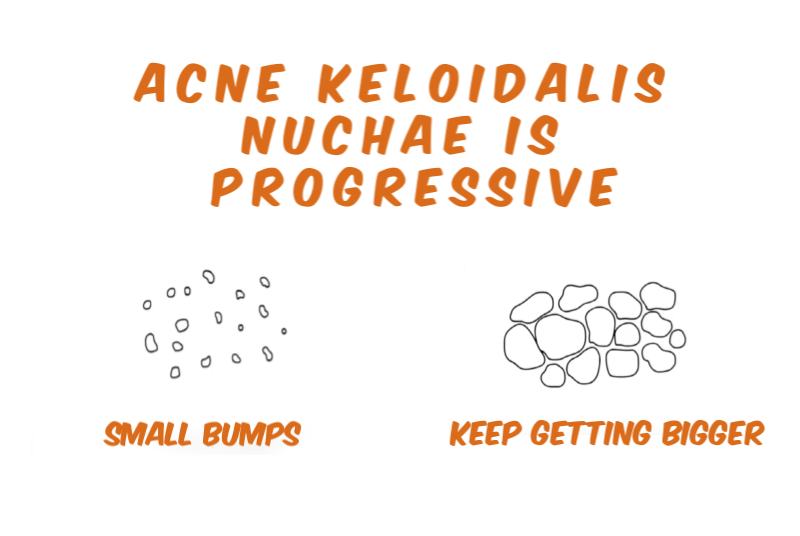 Thankfully, although AKN can be described as a painful or uncomfortable condition, the AKN itself is not a life-threatening condition. However, it does cause significant morbidity resulting in pain, discomfort, and malodor. Additionally, the esthetic appearance does become a source of concern for one’s self-image and how one feels about themselves, especially around others.

What Acne Keloidalis Nuchae is NOT 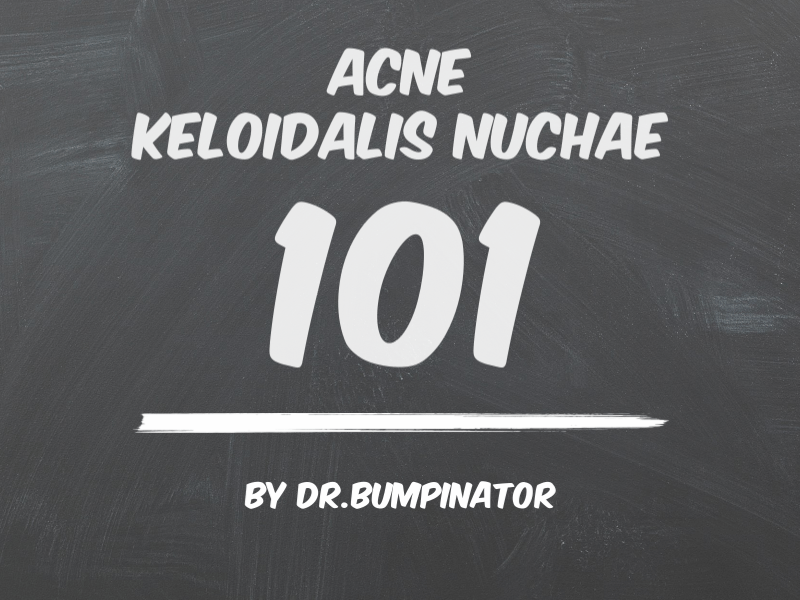 AKN is often mistaken for other types of conditions. Some of these misclassifications or misdiagnoses of AKN are:

Misclassification of  AKN is one of the leading reasons that prevent individuals from receiving appropriate and timely treatment. Often when the AKN grows to be quite large, patients turn to Dr. U AKA Dr. Bumpinator for help in getting rid of their painful AKN bump(s).

However, it does not have to get to this point, especially when the AKN condition is recognized early on.  Thus, to prevent more serious stages of AKN accumulating, it becomes crucial to become educated on what Acne Keloidalis Nuchae is not.

AKN is NOT the same as common acne or acne vulgaris

Acne pimples are caused by blockage obstructions in the skin’s pores. These can be caused by external dirt and debris. Or they can form from dead skin cells which shed from the lining of the pores and clump together. It is important for affected individuals to know that it is NOT caused by the use o dirty razors or an infection. Nor is AKN contagious.

Acne Keloidalis Nuchae is NOT the same as regular razor bumps

A very typical starting point for AKN is a close shave on the back of the head and neck. And the same is also true for harmless razor bumps. In both cases, curled hair will grow back into the skin. However, the difference between Acne Keloidalis Nuchae and common razor bumps is how the person’s skin reacts. This is determined by the individual’s genetics. If the hair becomes to grow back into the skin, thus creating “ingrown hair,” this can result in AKN.

AKN is NOT a keloidal condition

The term, keloid, is included within the name, Acne Keloidalis Nuchae. But this is really a misnomer, which causes people, including medical experts to regard it as a keloidal condition. In actuality, it is not.

Keloidal scar tissue, which is thick and raised, will form as a response to a cut or injury on the skin. The purpose is to take extra measures to keep it protected in those who are genetically predisposed.

If AKN is, in fact, a keloidal condition, removing it through surgery would only incur further keloidal scarring around the surgical wound. But in fact, the patients of Dr.Bumpinator/aka Dr.U, are able to achieve a straight and flat linear scar following their procedures without the need for further treatment. Removed lesions are gone permanently unlike true keloids which would recur after removal unless further treatment is done to prevent it. Due to these reasons, AKN is something that is different from a keloidal condition.

Based on what he learned from his own hands-on experience and direct observations, Dr.U (aka dr. Bumpinator) teaches a new perspective regarding the cause of AKN.

What one person may misunderstand as small razor bumps on the back of the head, can potentially be AKN, and can grow to this stage if left untreated. It is important to understand how Acne Keloidalis Nuchae develops as a patient, as this can help you understand the procedure and steps required to remove AKN better.

According to the conventional medical view described by many doctors, AKN is caused by the ingrowth of hair back into the skin and hair follicle, and the resulting autoimmune triggers of inflammatory reaction. Through this loop, ingrown hairs and the body’s own autoimmune response cycle run out of control, thus producing AKN bumps that one can see in AKN conditions as seen in the picture above.

In those who are genetically predisposed to developing Acne Keloidalis Nuchae, this feedback loop of AKN growth may become out of control.

Yet, modern science and medicine, and its current conventional understanding of AKN may not have the full picture:

Deeper Causes of AKN Explained By Dr. U AKA The Bumpinator

Dr. U has a different explanation. The hair shaft becomes trapped beneath the skin and in predisposed individuals, this results in a healing cascade that is in overdrive causing a hypertrophy response that is unrelenting for as long as the offending hair follicle remains. The skin produces thick collagen (i.e. fibrosis) in the form of non-keloidal hypertrophic scarring. This process is what creates the initial bumps and the enlarged growth lesions found in many cases of AKN. 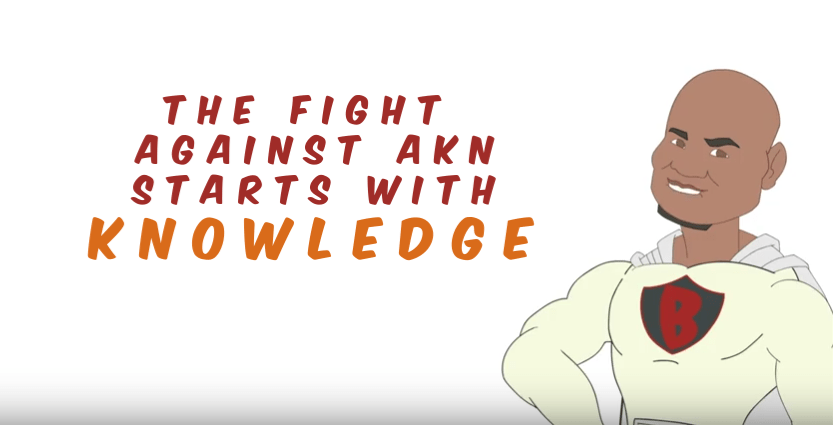 Don’t just leave it all up to the experts. Put your mind to work! Learn what you can about what AKN is, what it isn’t, and how it actually develops. You can do it!

Beyond using his extraordinary surgical superpowers to defeat AKN, Dr. Bumpinator is also dedicated to educating and informing others on what Acne Keloidalis Nuchae IS and IS NOT. Because again, AKN is not razor bumps on the back of the head, acne, keloids, nor is it a keloidal condition, and this is very important to understand if you have AKN so that you can diagnose and treat it immediately before it gets any worse.

This information is not just nice to know. A clear and basic understanding of AKN is an absolute must-have for preventing and treating the condition effectively.

VIDEO: OVERVIEW OF WHAT IS AKN & BUMPINATOR SOLUTIONS FOR AKN

If you are noticing the sudden appearance of bumps on the back of your head, this is not an issue to take lightly, especially since they may not go away on their own. More so, there is a chance that what you have is actually Acne Keloidalis Nuchae, which again is not the same as acne, common razor bumps, and keloidal scarring.

Dr. Bumpinator is more than a superhero surgeon, but also an educator with a rock-solid conviction that knowledge is power. A rather inconvenient truth is that the seriousness and nature of AKN have been severely overlooked. The Dr.Bumpinator animated series hopes to change all of this to prevent the devastating impact that Acne Keloidalis Nuchae can potentially have on patients’ lives.

If you are experiencing a case of AKN, or possibly believe that you might have AKN, know that Dr. U AKA The Bumpinator is here to help. If you suspect that you have more than just acne, keloids, or razor bumps on the back of the head, it is time to get checked by a licensed and experienced medical professional in the field of AKN such as Dr. U.

Although AKN or Acne Keloidalis Nuchae is a relatively new condition in the medical world, know that Dr. Sanusi Umar AKA The Bumpinator is recognized worldwide as one of the pioneers of successful AKN removal methods, who has had extensive experiences and successes with AKN patients of all types and severities. Thus, if you are experiencing bumps on your head and believe it may be AKN (Acne Keloidalis Nuchae), schedule a free consultation with Dr. U AKA The Bumpinator now using the button below.