Frustrated customers with “barber’s rash” have always pointed the finger at their barbers and attributed the cosmetically unsightly and itchy bumps to unhygienic conditions at the barber shop.

But that’s not the case. Those bumps on the back of your head may have nothing to do with your barber’s clippers. 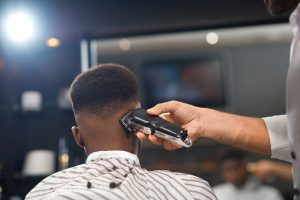 Unbeknownst, AKN sufferers, blame their barber’s “dirty clippers” for the bumps on the back of their heads.

Frustrated customers with “barber’s rashes” have always pointed the finger at their barbers and attributed the cosmetically unsightly and itchy bumps to unhygienic conditions at the barber shop. But that’s not the case.

According to Dr. Bumpinator, the superhero alter ego of Dr. Sanusi Umar of Dr. U Hair and Skin Clinic in Manhattan Beach, Calif.; those bumps are called  Acne Keloidalis Nuchae or- AKN.

Believe it or not, dirty clippers are NOT the reason men, primarily men of African, Hispanic, and Asian descent, are struggling with AKN. Instead, men who get close to taper haircuts or skin fades are at risk. In actuality, the constant close cutting of hair “causes ingrown hair irritation and creates an acute inflammatory reaction,” according to Medscape, a medical news guide (1).

And while the cause of AKN is still unsettled, Dr. Bumpinator believes that fundamental to the disease is a predisposition that causes any trauma of ingrown hair to cause a healing response that is in overdrive. The result is an exaggerated inflammation and scarring, which causes more of the same in a vicious cycle that causes the lesion to expand without relent. This may explain why some think it is a keloid when it is not. The ingrown hair occurs when the person shaves their head, and the regrowing hair causes ingrown hair due to frictional rubbing by neck collars and pillows. It has nothing to do with the cleanliness of the clipper or shaver. If you shave your head and have a genetic predisposition, you will develop AKN.

There have been so many types of treatments recommended to treat it. But nothing has been as effective and life-changing as the treatment options Bumpinator has developed that treat and cure AKN.

Seven-year-old Arhmani from Stockton, Calif., a few years ago, got a haircut at a barbershop in Sherwood Mall. It was a typical and routine haircut, but what ensued after came as an utter shock to his mom, Princess Redic.

“I was terrified. I didn’t know what it was. I thought it was dry scalp,” Redic told local news channel KCRA 3. “It was bleeding, and he had pus bubbles, and people were telling me it’s a ringworm, but I’m like, ‘that’s an infection.”

Reddic rushed her son to the hospital, where he was diagnosed with folliculitis. Frustrated and outraged, she filed a complaint to the California Board of Barbering and Cosmetology. The co-owner of the Exclusive Barber Shop disputed the claims. Unfortunately, these sorts of stories happen frequently, and the barbers have repeatedly accused the cause of scalp infections and bumps on the back of the head. Unfortunately, these bumps are also often misdiagnosed, leaving men and sometimes young teens to suffer in silence.

But what is AKN?

Acne Keloidalis Nuchae can be misleading as it is not a type of acne. Instead, AKN lesions manifest as firm bumps that look like pimples and keloids that form around the hair follicles in the back of the head and neck. Patients have described “the bumps” as itchy, immensely uncomfortable, and as if needles were stabbing into their skin.

Sometimes, it looks like a simple razor rash that has progressively worsened. Aside from being referred to as barber’s rash, some people have often referred to it as razor bumps, tinea barbae, Nestle Crunch, or confused it with boils, scalp acne, and folliculitis.

As the condition progresses, the bumps get more extensive and mold together. Over time, the bumps are more like lesions or even keloid-like plaques that become disfiguring and often painful. In more severe stages, clear pus or bloody discharge may leak from the affected areas. Patients with severe AKN cases also have talked about waking up to bloody pillows. Often, patients develop alopecia or irreversible hair loss with scarring.

Barbers are the front line of AKN Bumps. 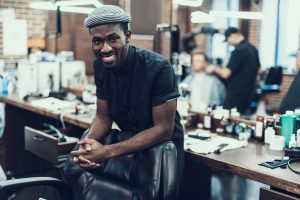 Barbers are the front line in helping their customers understand the bumps on the back of their heads that may appear particularly after a short or tapered haircut.

The barbers aren’t ruining your lives. Barbers are the allies, not the foes, in this battle against AKN. Dr. Bumpinator, although vigilant of AKN complications and treatments, does recognize the need for proper sanitation of grooming tools like combs and hair-cutting shears. But points out that when frustrated barbershop customers walk out of the shop with a barber’s rash, pointing the finger isn’t the answer. It’s not that the clippers were dirty or that the barber had unhygienic grooming tools. Although the barbers aren’t ruining their scalps, “what these customers need to realize is that they have a condition that needs medical care,” Bumpinator said.

Barbers are essential. They are the ones that notice the problems on the scalp first. This means whether it’s the early signs of balding or dandruff; this includes any symptoms of AKN. They can recommend patients seek early intervention by dermatologists specializing in AKN treatment before the condition grows out of control.

Do you believe you have acne keloidalis nuchae or an undiagnosed bump in the back of the head? Click the button below to get started on a bump-free life with Dr. U (The Bumpinator):

How do I know that my short haircut did not cause the bumps on my head?

A common mistake is that certain bumps after a haircut are just razor bumps. Sometimes, the bumps could be just razor bumps after a haircut and eventually go away on their own. But there are instances they don’t. And while the exact cause of AKN is unknown, the bumps are inflammations of the hair follicles that, if left untreated, can grow into a large mass. If you’re seeing these bumps repeatedly after haircuts or have gotten worse since a particular haircut, consider seeing a specialist that can better assess what they are.